In our previous two blog posts, Jaime Clarke, owner and instructor of Survival Swim, shared with us the first two secrets to learning how to swim: opening your eyes and learning how to float. In this third and final post of this series, we’ll complete the triad of survival swimming basics with the third secret: learning how to kick.

Learning How to Kick Properly

In Survival Swim, we teach survival first, and kicking is a critical survival skill in the water. Your legs are powerful and capable of propelling you to safety — if you know how to kick correctly.

Poor kicking can wear you out, making it harder to swim to the pool edge, shallow end, shoreline, or another safe escape point. “When you kick with good form, you conserve energy, propel yourself forward, and increase buoyancy,” says Clarke. “Poor kicking wastes valuable energy and can make it harder to keep your head above water. As a result, swimming becomes a dangerous struggle rather than a productive movement.”

Start with the Flutter Kick

The flutter kick is a basic movement where the legs move up and down in an alternating, steady rhythm. “In Survival Swim, we teach the flutter kick while the learner is face-down in the water,” says Clarke. “By keeping face down, eyes open, with legs extended straight, and toes pointed, the swimmer’s head, hips, and heels come into alignment at the surface of the water. This body position is optimal for moving quickly through the water.”

A Little Goes a Long Way

When teaching a new swimmer the flutter kick, it’s important to remind them that a little bit of movement is enough. Flutter kicks don’t have to be big to be powerful. If your new swimmer’s legs are coming out of the water, making a big splash, or their legs are extending deep into the pool, causing their body to jack-knife, then they’re wasting valuable energy.

“Small, steady kicks are all a swimmer needs to keep moving,” advises Clarke. “Think about the width of the swimmer’s hips. That’s about the maximum kick depth you want.”

You can help your child master their kicks by having them focus primarily on the downward motion. “Challenge your child to kick without splashing. Chances are, if they’re not pulling their legs too far upward, then their downward motion will also be more controlled.”

While intermediate and advanced swimmers sometimes use paddle boards or other floatation tools, new swimmers need to learn the kicking basics without such devices. “Paddleboards are much like goggles when it comes to learning,” says Clarke. “You run the risk of making your child dependent on the tool, which leads to unsafe conditions, especially in emergencies.” So before reaching for that paddleboard, make sure your child can kick with confidence up and down the pool.

Putting it All Together: The Swim-Float-Swim Method

“By putting the three secrets of swimming together, you come to a point where you can teach a valuable survival strategy in the water called swim-float-swim,” says Clarke. The swim-float-swim method alternates between periods of face-down, open-eyed kicking and back floating.

Children as young as six months old can start learning Survival Swim basic skills, up to and including swim-float-swim. Survival Swim is a mobile swimming lesson service in the greater Phoenix area. This affordable solution, taught in your home, community pool, or at our “home” pool in Avondale, AZ, helps teach your child vital swimming skills. Even if you don’t have a pool, you can teach many of the Survival Swim basics to your child in a bathtub or kiddie pool. By teaching your children the secrets of swimming from a young age, you can make water safety and survival ingrained and inherent skills that they’ll carry throughout their lives. 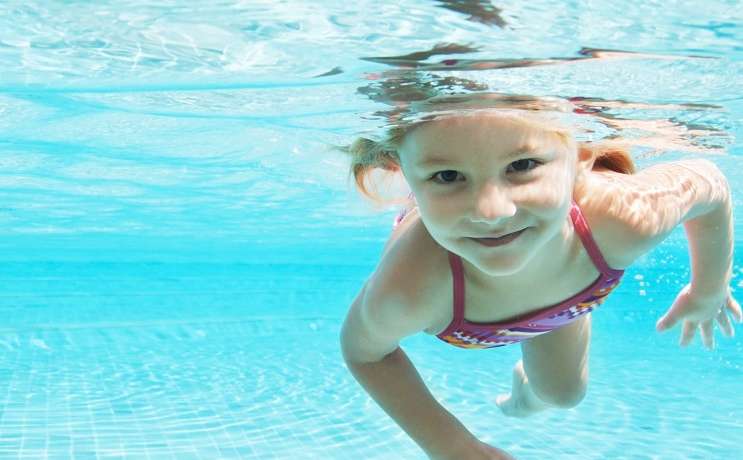 Get Ready for Swimming Season How Do I Teach My Baby How to Swim?